The problem of cancer is still of utmost importance, so today’s research is also concentrated on the usage of green tea and its properties to introduce prophylactics and even cure it in case if the disease has been already diagnosed. Scientists think about the feasible ways to utilize green tea somehow and delve into experiments for a find of cancer type for which the green tea usage would be most efficient.

Anyway researchers have already learned about doubtless benefit of a anti-oxidant-based diet. It comes out that the anti-oxidants are mighty recourse for the purposes of illness’ prophylactics and hampering aging. Considering the amount of processed food which people consume nowadays, the diet grew even more significant. Dark chocolate, green tea, vegetables and fruits are highly saturated with anti-oxidants products. We may see that such drink as coffee isn’t so rich in anti-oxidants as the Vietnamese green tea, though it’s still a origin of them.

Our body produces harmful free radicals each time during food processing, we won’t get though without it since the products of how the energy is generated. We can’t slow down the aging and avert the disease without any measure since free radicals, which contain oxygen, hasten these processes. Also these elements lead to tight block of arteries and make us in high degree receptive towards the physical difficulties of aging. 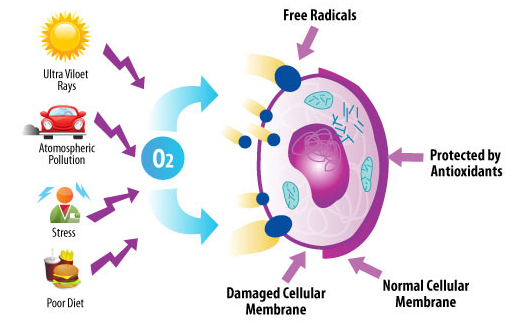 High enough amount of anti-oxidants is what we should consume to be more less healthy, anyway. But the green teas here are a special. Asian people were champions of its curable abilities and drink green tea for thousands years. And somehow it goes like this – the total percent of cancer and heart illnesses appearances in Asian countries are definitely lower than in Western world.

You may notice other diversities between our and Asian cultures, undoubtedly. For instance, Western people are in higher degree prone to obesity, and it rather coincides with the studies that shows the overweight as a substantial factor for appearance of such illnesses as cancer and heart illnesses and many others. Nevertheless, right one – one greatly shocking fact: there’re more smokers among men in Japan, however they’re more invulnerable to the above-listed diseases than we are. It’s a fact of statistics. 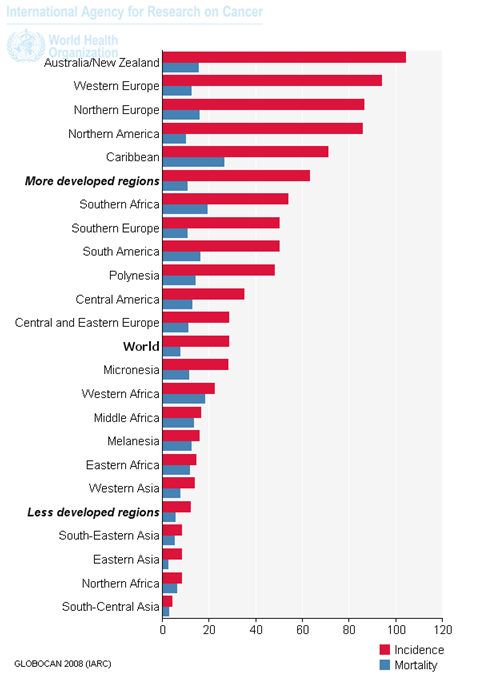 (The incidence and mortality of Prostate cancer in the world, 2008 - from International Agency for Research on Cancer)

That’s why we should admit a great importance of green tea for the base human task – leading a healthy life-style just to live more. The green teas are a great support in cancer prophylactics and high efficiency of cancer treatment – that’s what studies display.

There’s another study, considering the skin cancer. The most wide-spread and active in its appearance is skin cancer, it’s the result of American Cancer Society analysis. And Melanoma has the most high rate of mortality among them – it evolves more death cases than any other kind of cancer in general, besides it’s just four percent of all cancer cases. The quantity of cases has been constantly growing in the US and the prognosis for 2006 year was like this – 8,000 would pass away for melanoma and its presence would be disclosed in 62,000 new cases. On the other hand, another more wide-spread type is nonmelanoma. The prediction may be depicted as that – one million would be diagnosed with nonmelanoma every year. In other words, it’s the same number of people who acquire another types of cancer altogether. However it should be noticed that there’re just thousand people become dead because of it in the US every year, so the nonmelanoma mortality isn’t so enormous than in the previous case. 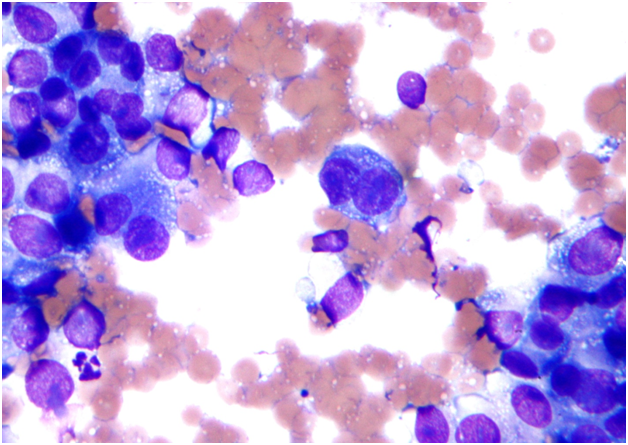 Consequently it’s obvious to spend money, effort and time on skin cancer researches, since, moreover, it’s predominant in our country. Somehow, or partially, it can be forestalled. At first, we should be considerate towards the sun and its effect upon the skin, because it’s the common cause, in combination with other factors, of skin cancer.

So be attentive to duty of protection from the sun, even if it’s cloudy outside or yet winter. It means a usage of sunscreen with an SPF of 15 as minimal and coating as much skin of your body as far as you can. Please keep following the direction of the sun cream attentively and do not be negligent of reusing it often and using big enough portions.

So get back to the green teas, for the results of researches sound quite optimistic. One study, communicated by the Alternative Medicine Review, has greatly promising results – prophylactics and treatment of skin cancer were conducted over mice more efficiently with the help of green tea, which was carried on both the skin outwardly and consumed orally.

Mice here were subjected to diverse types of carcinogens, seven in number, and in this particular research it was a necessity since all of them pay their dime in development of skin cancer. Experiential animals were subdivided into groups: some of them were treated with green tea by the way of changing from their drinking water to it. Others consumed green tea extract as well outwardly. Amidst these groups some mice had been already diagnosed with cancer.

The mice went though exposure of diverse carcinogens and consumed green tea in both forms. It was led in this way – some mice were subjected to doses of UVB rays and they received only oral green tea, whereas another group was obliged to gain just external extract of green tea.

The results of research showed that all mice had a noticeable profit from green tea receiving, independently if it’s consumed outwardly or orally. Throughout all groups tea had a significant role in preventing skin cancer. Moreover, external usage of green tea appeared an ability of the extract to seek and eliminate inclined to cancer’ mutation cells.

Also the green tea delayed the cancer’s development in species, which had been already contaminated. In addition, prominent decline was noticed in cancer cells’ vitality with the usage of green tea orally.

That’s why the final resume of such tests are very optimistic. There’s new field in cosmetics may be initiated – appearance of green tea among skin products, since the marked study worked as a sigh of high efficiency of green tea in and on the human body.

Also it can be useful to give a chance for human experiments to see whether the results will be the same. In any case we can predict that regular consumption of green tea surely restricts high temps of aging process and avert cancer. For we’ve already enough intelligence to prove this.

The most significant news here – we can be the gainers by simple applying of green tea to our skin. There’s one more help, besides well-used lotions, moisturizers and sunscreens, which can downsize the amount of diagnosed cancer cases annually. Whether you’ve already developed the illness it might be useful to use green extract externally for the purpose of eliminating skin cancer’ sells or reduce the speed of their progression.